Pete Doherty, Rock musician, on-off boyfriend of model Kate Moss, was given a suspended jail sentence of four months on for a series of drug and driving offenses. 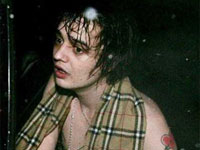 Appearing at West London Magistrates Court, Doherty was also placed under court supervision for 18 months and given a 12-month drug treatment order.

"You have made strides and I hope you will continue in doing so. I would hate to see you going backwards," district judge Davinder Lachhar told Doherty, who was cheered by a gaggle of fans as he left the courthouse.

At another London court on Wednesday, Doherty had been released from a court-ordered drug treatment order after satisfying a judge that he would continue his efforts to beat addiction.

Doherty, 28, was arrested in May and subsequently pleaded guilty to possession of crack cocaine, heroin, ketamine and cannabis and a variety of driving offenses.

He was arrested again in August for allegedly breaching bail conditions by possessing drugs, but that charge was dropped because police failed to meet a deadline for bringing him to court.