British police considres that a photograph belonging to Elton John is not an indecent image, and it does not amount to child pornography. 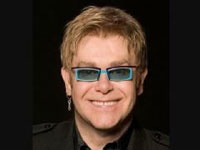 The Crown Prosecution Service said in a statement that there was not enough evidence to justify charges of possession or distribution of an indecent photograph. The picture, taken by American photographer Nan Goldin shows two girls dancing and one of them is naked.

The BALTIC Center for Contemporary Art, in Gateshead, northeastern England, turned over the photograph on Sept. 20 - a day before it was due to go on display. It then closed "Thanksgiving," an exhibition of 149 Goldin pictures at John's request.

John, who purchased the series of photographs in 1999, had said earlier that the picture, "Klara and Edda Belly Dancing," had been exhibited across Europe and the United States without any objections of which he was aware.