The 4-year-old boy took a breath, ducked underwater and planted a kiss on the huge whale beside him. 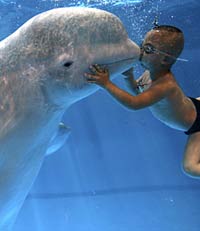 A trainer then lifted Huang Yan onto the back of the beluga whale, which is about 30 times his size, and the little boy sat astride the animal's back as it glided smoothly just under the surface of the water.

The boy's feat is the latest example in China of a bizarre athletic accomplishment involving a child.

With the Beijing Olympics less than 10 months away, pint-sized athletes are grabbing the spotlight with stunts that some criticize as unsafe or unhealthy, raising questions as to whether they are being pushed by attention-seeking adults.

"If my grandson can become a world (swimming) champion one day, I'd be a proud grandma," 55-year-old Jing Xueying said while watching Huang Yan, who sports a buzz cut with one tuft of hair at the front sprouting straight out.

"That's the dream, I'm working hard here to achieve it ... I think my dream will come true," she told AP Television News.

Huang Yan, who goes by the nickname Yang Yang, has been going to the Polar Ocean World Aquarium in his hometown of Qingdao, an eastern Chinese coastal city, for more than four months to swim with Xiao Qiang.

He began swimming before he was even a year old and fell in love with the whale after seeing him perform in a show at the aquarium.

Beluga whales look like dolphins but have flat noses and a big forehead. Xiao Qiang, who is 6 years old, is 3 meters (nearly 10 feet) long and weighs 450 kilograms (1,000 pounds).

Jing said she approached aquarium officials about letting her grandson swim with the beluga whale after he came home from an aquarium visit asking if he could "go and play with Xiao Qiang."

At first, officials were skeptical because they were afraid for the boy's safety, said Mu Peng, director of the aquarium's publicity department.

"But after discussions among aquarium managers, they decided to give it a try and discovered that little Yang Yang was a strong swimmer," Mu said.

Yang Yang was scared at first, his grandmother said.

"But he and Xiao Qiang played a little and he got over his fear and now they're good friends," she said.

His grandmother isn't worried about safety, even though Zhong said belugas can attack when they get angry.

"I see the trainers are there," she said. "There's really nothing to be scared of."

It's hard to say whether Huang Yan knows what all the fuss is about. He answered with a long "mmmmm" and twisted the front of his T-shirt when reporters asked what kind of animal he was swimming with, or what it felt like to ride on its back.

Another feat involving a child came over the summer, when 8-year-old Zhuang Huimin ran 3,560 kilometers (2,212 miles) from her home in the southern island province of Hainan to Beijing in 55 days, her father trailing behind her on a motor scooter. The run drew criticism from some as being excessive for a young child.

Earlier this month, a father tied his 10-year-old daughter's hands and feet and watched her swim in a chilly southern China river for three hours. The man said it would help the girl achieve her dream of swimming across the English Channel.