At  the age of 12 convicted killer Lionel Tate became the youngest person in modern U.S. history to receive a life sentence. 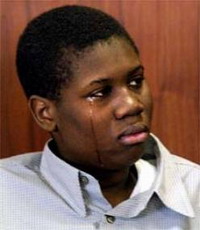 Tate could now get life in prison at an upcoming trial on unrelated robbery charges.

Tate, 20, had sought to have the probation violation sentence thrown out based on procedural mistakes in court, his attorney, Jim Lewis, said Thursday. The 4th District Court of Appeal declined to reverse it Wednesday.

He violated probation by acknowledging in a plea that he had a gun in another incident before the 2005 robbery. At the time, he was under supervision for his murder conviction in the 1999 beating death of 6-year-old Tiffany Eunick.

His first-degree murder conviction eventually was overturned by an appeals court in 2004. He was freed from prison under a deal in which he pleaded guilty to second-degree murder and was sentenced to 10 years' probation.

But he got in trouble with the law again in May 2005, when police said he robbed a pizza delivery man.

Tate had faced just 10 to 30 years in prison for initially pleading guilty to both the robbery and probation violation charges.

But in an unusual move and against the advice of his attorneys, Tate withdrew his guilty plea for the robbery but maintained the plea on the gun charge. That brought him the 30-year sentence last year.

Tate's new attorneys said they plan to file another appeal of his probation violation sentence based on ineffective counsel.

"We're disappointed but it's not the end," Lewis said.

Tate's robbery trial was delayed in April after his new attorneys said they have evidence that proves he did not commit the crime. No new trial date has been set.