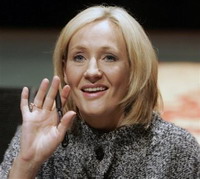 The book was published by Bloomsbury PLC with an initial print run of about 500 copies. Many were purchased by libraries, making copies in good condition extremely rare.

It was published in the United States the next year as "Harry Potter and the Sorcerer's Stone," and the boy wizard soon became a publishing phenomenon.

The seventh and final installment in Harry's adventures, "Harry Potter and the Deathly Hallows," was published in July. The seven books have sold nearly 400 million copies and have been translated into 64 languages.