100,000 crocodiles to be exported from Mozambique

Mozambique plans to export about 100,000 crocodiles to South Africa and Zimbabwe over the next six months. 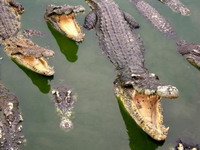 100,000 crocodiles to be exported from Mozambique

An operation to collect crocodile eggs in the Zambezi Valley is being carried out by local fishermen in collaboration with South African crocodile breeders, Manuel dos Santos, a spokesman for the provincial government said Thursday.

"Crocodiles born in artificial incubators will be exported to South Africa and Zimbabwe", Dos Santos said.

Crocodiles are also being bred in the southern provinces of Maputo and Inhambane, as well as the central province of Manica. The reptiles are prized for their meat and skin.

Dos Santos said that, apart from the financial gain that the export of the crocodiles would bring, Mozambican authorities also believe it will reduce the risk posed by the animals. Collecting the eggs will, presumably, reduce the crocodile population in the country.

Crocodiles, known as deadly man-eaters, lurk in Africa's many rivers which are a life source for the continent's impoverished populations. Along with elephants and lions, they are responsible for hundreds of deaths.

More than 30 people have been killed by animals in the last few years in Mozambique.

"Crocodiles represent a threat to the population," said Dos Santos.