Rapper Foxy Brown was given 76 days in punitive segregation in jail after she fought with another inmate, authorities said. 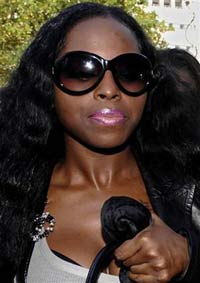 Brown and another inmate got into a shoving match earlier this month, said Morello, adding he did not know why the two were fighting. Neither inmate was injured.

Following that incident, Morello said Brown was abusive toward correction guards and then refused to take a random drug test.

The combined violations, Morello said, earned Brown more than two months in punitive segregation, where an inmate can spend up to 23 hours a day in isolation.

A message left with Brown's lawyer was not immediately returned.

Brown is serving a year in jail for violating her probation in a case related to a Manhattan fight she had with manicurists in a nail salon.

Authorities said Brown, whose real name is Inga Marchand, skipped her required anger management classes and traveled out of the city without permission.

Brown also refused to attend court after she was accused of throwing a cell phone at a neighbor who complained about the volume of her car radio in August.

Four days later, she appeared in court and was arraigned on charges of assault, attempted assault, menacing and criminal possession of a weapon - the cell phone.

She has pleaded not guilty.