Jackie Chan has recorded the official one-year countdown song for the Beijing Olympics, "We Are Ready," the action star said on his blog. 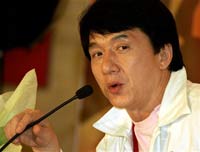 Chan is best known for his daredevil stunts, but he dabbles in singing and has released several albums.

Chan said in a blog entry on his official Web site Wednesday he spent three hours recording the song during a recent trip to Beijing.

The veteran actor praised the lyrics to the Mandarin Chinese song composed by Peter Kam, who won a Silver Bear award for best film music at the Berlin Film Festival last year.

"Waiting year after year/We can see into the future/Together with hard work and sweat, we've created the five different (Olympic) colors," one refrain of the song says.

Kam told The Associated Press in a phone interview that Beijing organizers are considering recording an English version.

Aside from the countdown song, Olympic organizers are expected to announce in March another batch of official songs to promote the competition, he said.

Chan said in an earlier blog message he got goose bumps attending the official one-year countdown event in Beijing on Aug. 8.

Separately, Chan said that "Air Diary," the first of 10 Chinese movies he's backing has been completed. Details of the plot and its release plans weren't immediately available. A spokeswoman at the Beijing office of Chan's JC Group didn't immediately respond to a reporter's e-mail seeking comment. All 10 upcoming films feature new directors and actors.