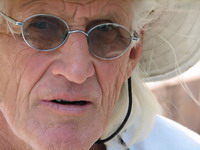 His million-dollar stone sculpture, "Spaceship Earth," mysteriously collapsed in December at Kennesaw State University. The artwork was intended to remind future generations of the Earth's fragility.

After working since the end of June to rebuild the globe, he said this week he is putting the finishing touches on it.

"It really looks nice," said Eino, who uses only one name.

Eino had called the work "Spaceship Earth" to honor environmentalist David Brower, a leader of the Sierra Club. It depicted a bronze figure of Brower standing atop the globe. The founders of California-based PowerBar had paid for the $1 million (700,000 EUR) sculpture.

When the 175-ton, 22-foot-high (6.7-meter) sculpture collapsed, inadequate adhesive initially was blamed. But Eino said he has reason to suspect it was the work of vandals.

He said an expert from Holland-based Stone Advice examined the wreckage and concluded it collapsed from "mechanical-induced failure." (6.71-meter)

Eino said it looked like someone had tried to pull the life-size bronze figure of Brower from its perch atop the globe. He said the expert noticed what looked like chain marks around the figure's neck and tire tracks in the grass.

"After that, it got unbalanced and the adhesive didn't hold well enough," said Eino.

He called the disintegration of his artwork "devastating."

"It was very difficult for me to put it back together mentally," he said. "I felt absolutely horrible when it came down, but I felt a responsibility to put it back up."

Eino said he modified the design during the reconstruction to ensure his artwork - made of more than 80 pieces of Brazilian blue quartzite with 2,400 bronze pieces - stays together.