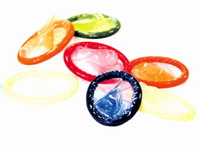 The latest recall - which involves condoms distributed free of charge by the government - comes on the heels of a scandal in which the local company Zalatex in August was found to have bribed an official of the South African Bureau of Standards to approve defective condoms. Then, the government called for 20 million condoms to be recalled or held at the factory. Only 12 million have been recovered.

The recalls are a blow to the country's campaign to encourage condom use to prevent AIDS. South Africa has 5.5 million AIDS victims - the highest number in the world - with 900 people dying per day.

In separate tests following news of the bribery, at least five batches of condoms from Kohrs Medical Supplies, a South African company, failed an air burst test, a ministry statement said. Condoms are distributed in boxes of 6,000.

The government recalled 5 million condoms supplied by Kohrs, which was not implicated in any bribery.

"We appeal to the public and all partners involved in the distribution and promotion of the use of condoms to assist with the recall," the statement said.

Recalling the condoms raised questions about the competence of the Bureau of Standards, which is supposed to ensure that the contraceptives are up to World Health Organization standards.

Condoms supplied by two other companies passed the air burst test, it said.