The remains of the only grandchild of Zionist pioneer Theodor Herzl will be reburied in Israel. 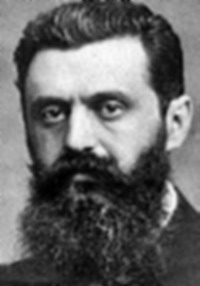 Stephan Theodor Norman, known as the only Zionist descendant of Herzl, was buried in the Adas Israel Congregation's cemetery in Washington, D.C., in 1946.

Washington health authorities agreed recently to Norman's disinterment, said Michael Jankelowitz, a spokesman for the Jewish Agency, a quasi-governmental body that was involved in the project.

Rabbi Jeffrey Wohlberg of Adas Israel, a Conservative congregation, said it was only natural to rebury Norman's remains in Jerusalem.

"We agreed to it because the Israeli government brought Herzl's other children's remains to Israel and reburied them at Mt. Herzl," he told The Associated Press in a telephone interview, "and we thought that it would be appropriate that he be buried with the rest of the family."

Herzl was a journalist and author based in Vienna, Austria, who became revered in the Jewish world for his convictions that Jews needed their own nation, and he is recognized as the "father of Zionism." He was greatly affected by what he believed was virulent anti-Semitism when in 1895 a French Jewish military officer, Alfred Dreyfus, was wrongly convicted of espionage.

The following year, Herzl published his seminal work, "The Jewish State." He later founded the World Zionist Organization, which spearheaded Israel's establishment in 1948.

Norman was known as the only Zionist among Herzl's descendants and was active in the movement before the founding of Israel in 1949, reading about his grandfather's work when he was sent to England for his safety just before World War II.

Norman served as an officer in the British army during World War II, changing his name from Neumann to avoid anti-Semitism, according to a history of the Adas Israel congregation. His mother, Trude, was Herzl's youngest child.

She perished at the age of 50 at the Terezein concentration camp in what was then Czechoslovakia. Unable to handle news of the deaths of his relatives at the hands of the Nazis, Norman committed suicide by jumping off a Washington bridge.

Theodor Herzl, who died in 1904 at age 44, was buried in Vienna, but specified in his will that he wanted his body, and those of his close relatives, moved to the Jewish state he hoped would one day be created.

In 1949, a year after Israel's independence, Herzl's body was brought to Jerusalem and buried in the Mount Herzl Cemetery, which later became the final resting place of Israel's leaders and war heroes. The bodies of Herzl's parents and sister were brought later.

The decision to bury Norman in Jerusalem comes a year after the remains of two of Theodor Herzl's children, Pauline and Hans, were brought from France for burial near their father in the cemetery that bears his name in Jerusalem. They had lived troubled lives and died young. Hans converted to Catholicism, and Pauline was known as a drug addict.