Precious painting stolen 20 years ago found in pile of garbage

A painting stolen 20 years ago was discovered in a pile of garbage along a New York street, and now it could fetch up to $1 million (700,000 EUR) at auction. 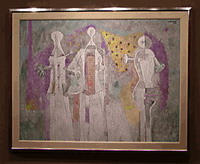 Precious painting stolen 20 years ago found in pile of garbage

Elizabeth Gibson did not know anything about the brightly colored abstract work she spotted on her morning walk four years ago on Manhattan's Upper West Side. Sotheby's auction house will be selling the work next month for the now-widowed original owner.

"I would say it was an appointment with destiny," Gibson said in a telephone interview Tuesday. "I just knew it meant something. ... It was extremely powerful, and even though I didn't understand it. I knew it had power."

It turned out that it was a 1970 painting titled "Tres Personajes" (Three People) by Mexican artist Rufino Tamayo, whose work has soared in value in recent years.

A Houston couple whose names were not disclosed purchased the work - an oil on canvas with marble dust and sand worked into the paint - in 1977 at Sotheby's. It was stolen in 1987 from a warehouse where they had placed it while moving.

The couple reported the theft to Houston and federal authorities. Information on the missing painting also was posted on the databases of the International Foundation for Art Research and the Art Loss Register. But no credible leads had turned up.

August Uribe, Sotheby's senior vice president of Impressionist and modern art, said in an interview Tuesday that the husband paid $55,000 for it as a gift for his wife. He has since died and she is putting it up for sale.

Tamayo was born in 1899 in the Mexican state of Oaxaca and studied at Mexico's School of Fine Arts. His early work had similarities to that of famous Mexican muralists such as Diego Rivera. His later style is more individual, featuring the vivid colors and expressions of Oaxaca and the influence of pre-Columbian art.

By the time he died in 1991, Tamayo was famous worldwide with numerous prizes to his credit and exhibitions in the United States, South America, Europe and Russia.