New York City cabbies organized the strike for the second time to protest new rules requiring credit card and GPS technology in taxis, but it did little to slow the city Monday, as familiar fleets of yellow cabs lined up as usual outside transportation hubs. 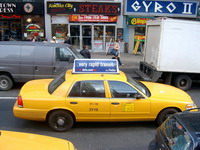 For the second time in two months, the cabbies called a two-day walkout over the new technology, saying it is an invasion of their privacy.

It was not immediately clear how many drivers were honoring the strike.

Bhairavi Desai, executive director of the Taxi Workers Alliance, said that 75 percent of all cabs were on strike, basing her estimate on scouts who report back to the alliance, the group leading the strike.

But the city said the vast majority of the city's 44,000 licensed taxi drivers were working.

Last month, the alliance, which claims to represent about a fifth of the city's cab drivers, called a two-day strike and deemed it a success. City officials said it had little effect.