TV soap opera "One Life to Live" star has been released without bail following his arraignment in New York on assault and other charges. 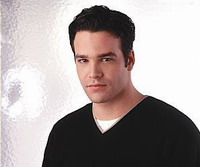 Nathaniel Marston, 32, who plays a doctor on the ABC daytime show, attacked three men with a crate around 4:30 a.m. Sunday in midtown Manhattan, according to a felony complaint filed in Manhattan Criminal Court.

Marston struck one man on the hand, hit another in the back of the neck, then caused the third man to be hospitalized with a broken leg, the complaint charges.

When officers tried to arrest Marston, he began flailing his arms and kicking at officers and refused to be handcuffed, the complaint says. It says Officer Sean Turner had medical treatment for a cut hand and bruised knee.

Jennifer Kushner, spokeswoman for the Manhattan district attorney's office, said Marston also was treated at Bellevue Hospital Center for scrapes and bruises before his court appearance.

Marston was charged with four counts of second-degree assault, menacing, reckless endangerment and resisting arrest. He was released without bail by Judge John Cataldo, who scheduled his next court appearance for Feb. 4, 2008.

Lori Hogan, spokeswoman for ABC, said, "We're aware of the incident and (are) reviewing its details."

Marston, a Connecticut native raised in Hawaii and California, plays Dr. Michael McBain on "One Life to Live." He has been on the show since 2001, according to Soap Opera Digest. He previously played Eddie Silva on the CBS soap "As the World Turns."