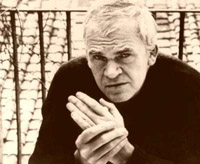 Czech Republic has rewarded its famous author Milan Kundera for the first publication of his novel "The Unbearable Lightness of Being" in his former home country.

Kundera wrote a letter to Culture Minister Vaclav Jehlicka expressing thanks for the award, which includes a prize of 300,000 koruna (EUR11,000; US$15,700), the ministry's spokeswoman Marcela Zizkova said.

Kundera also said he would not be able to attend Thursday's ceremony to pick up the award due to unspecified health problems, Zizkova said.

The 1984 novel was first published in the Czech Republic last year, and it topped the best-seller list for weeks.

Kundera was born in Czechoslovakia in 1929. Since 1975, he has been living in France where he published his famous books, including "The Book of Laughter and Forgetting," "The Unbearable Lightness of Being," "The Art of the Novel" and "Immortality." He was granted French citizenship in 1981.

Kundera has not yet allowed the Czech publication of his more recent works, including "Slowness," "Identity" and Ignorance," due to concerns over the quality of translation.