The city medical examiner has ruled that the death of a retired police detective was not caused by exposure to toxic dust while working at the collapsed World Trade Center. 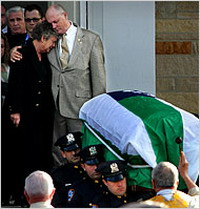 Dr. Charles Hirsch rejected a New Jersey medical examiner's ruling that 34-year-old James Zadroga's death was "directly related" to his work cleaning up the World Trade Center site. That ruling found that Zadroga died in January 2006 of sarcoidosis, a lung-scarring disease that deposits dangerous growths in the lungs.

After reviewing the autopsy report, Zadroga's medical records and slides of the detective's lung tissue, Hirsch concluded that the detective's death was not caused by exposure to dust, according to a letter addressed to Zadroga's family and obtained by The Associated Press.

"It is our unequivocal opinion, with certainty beyond doubt, that the foreign material in your son's lungs did not get there as the result of inhaling dust at the World Trade Center or elsewhere," said the letter, dated Tuesday and signed by Chief Medical Examiner Hirsch and Medical Examiner Michele Slone.

The letter did not elaborate. Hirsch spokeswoman Ellen Borakove declined to comment on the letter Thursday.

The detective's father, Joseph Zadroga, said he would meet Friday with officials at the medical examiner's office.

"It's shocking. ... How can they be so callous?" Joseph Zadroga said. He said his son developed a cough in the first weeks after the Sept. 11 attacks while logging hundreds of hours cleaning up the toxic site.

"He had the acid reflux. He had short-term memory loss. ... He was on strong medications for the pain in his lungs," Zadroga said.

Michael Palladino, president of James Zadroga's union, said he was shocked that Hirsch's office would express such certainty, "when in fact they can't tell me what he died from."

"I don't trust it," Palladino said. He suggested that the letter may be related to the city's defense in a federal lawsuit accusing it of failing to adequately protect workers at the site.

James Zadroga has become a symbol for the plight of ground zero workers whose health rapidly deteriorated in the months after their long days toiling in the rubble at ground zero. He spent 470 hours sifting through the smoldering ruins, and by the first anniversary of the attack was plagued by a constant cough.

His autopsy results were the first scientific evidence blaming a death directly on ground zero exposure. Lawmakers and health advocates regularly cite his case as a key example of post-Sept. 11 illness when lobbying for billions of dollars to fund research and continuing care.

His father has become a prominent advocate for sick ground zero workers, and he broke down in tears last year before a congressional panel convened to study Sept. 11 health.

Joseph Zadroga had asked Hirsch to review his son's case in a bid to be listed officially as a victim of the Sept. 11 attacks. Hirsch this year ruled that a woman caught in the towers' collapse and who died five months later of lung disease could be added to the victims list.

That marked the first time a person who survived the towers' collapse but died later of health problems was added to the official death toll.

The Zadrogas seemed to have a good case for such a decision: An Ocean County, New Jersey, medical examiner ruled in early 2006 "with a reasonable degree of medical certainty" that the death of James Zadroga, of Little Egg Harbor, New Jersey, was directly related to cleanup work at the site.