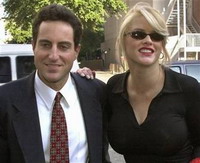 In court papers filed Thursday in Los Angeles Superior Court, Stern argues that Smith's daughter, Dannielynn, is the sole beneficiary under the correct reading of Smith's will even though the child's name is not mentioned.

Smith's will, drafted long before the birth of daughter in September 2006, was not updated before Smith died in February of an overdose in a Florida hotel.

But Smith intended to include her daughter, Stern claims in court papers.

She told her estate attorney in the years before her daughter's birth that "although she did not expect to have any children in the future, if she did, she wanted them to share equally in the trust" with her son," Daniel, according to court papers.

Daniel was Smith's only child at the time the will was drafted. He died three days after Dannielynn was born.

Stern, the will's executor, asks a judge to create a trust for Dannielynn, who stands to inherit millions.

She now lives with her father, photographer Larry Birkhead, who was established as her parent through DNA testing that settled a legal dispute with Stern.

Smith, who died Feb. 8 in a Florida hotel, was the widow of Texas oil tycoon J. Howard Marshall II. She had been fighting Marshall's family for years over his estimated $500 million (350 million EUR) fortune, which could eventually go to Dannielynn.