Author J.K. Rowling has come to New Orleans to read a passage from the seventh and final book of her Harry Potter series on Hogwarts School of Witchcraft and Wizardry to an auditorium of young fans. 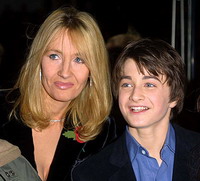 More than 1,500 students from 80 New Orleans area public schools attended, some wearing tall pointy hats. After the reading Rowling answered students' questions and signed copies of the book, "Harry Potter and the Deathly Hallows," which she gave to each student.

"I was so happy," said 11-year-old Kehnemah Downing, adjusting her tall floppy hat. "I never had my own Harry Potter book."

Rowling's visit Thursday to New Orleans was part of a weeklong visit to the U.S. known as the "Open Book Tour." On Monday, she read to young fans at the Kodak Theater in Hollywood , and she is slated to read at New York 's Carnegie Hall Friday.

Rowling, a former schoolteacher, fielded preselected questions from students after Thursday's reading. She said she remembers the first book that made her feel passionate about reading and storytelling: She was 4 years old and home sick with the measles. Her father read her "The Wind in the Willows" by Kenneth Grahame.

She also gave advice on how to become a good writer: "Read a lot," she said. "And write what you know."

She said many of the Harry Potter scenes and characters came from people and places she has encountered in her life.

Rowling - and her American publisher, Scolastic, which hosted Thursday's event - left their mark in the city still recovering from Katrina.

Scolastic donated 10,000 copies of "Harry Potter and the Sorcerer's Stone," Rowling's first Harry Potter book, to Orleans Parish public school students. The company also announced it is donating a complete set of the Harry Potter series to each public school and public library in New Orleans.