A former cook got lifelong sentence for killing and dismembering four people during a murder spree in Maine last year. 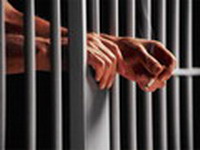 Christian Nielsen, 32, pleaded guilty to four counts of murder last week in the deaths of three woman and a man over a four-day period in Maine's worst homicide in recent memory.

Justice Robert Crowley sentenced Nielsen after hearing testimony from about 20 family members of the victims and of Nielsen.

Nielsen was a boarder at the Black Bear Bed & Breakfast in Newry, Maine, and working as a cook at a restaurant in nearby Bethel at the time of the killing spree.

Nielsen first shot James Whitehurst, 50, dismembered his body and buried the remains in the woods. Whitehurst was a handyman who had been staying at the lodge.

Over the next three days, Nielsen also killed the lodge's owner, Julie Bullard, 65; her daughter, Selby Bullard, 30; and her daughter's friend, Cindy Beatson, 43, to cover up the murder of Whitehurst. He used a chain saw and hacksaw to dismember the bodies, prosecutors said.