Nicolas Sarkozy and Cecilia, French President and his wife, have dissolved their marriage after months of questions concerning their relations, a precedent-setting split and a personal blow to the president. 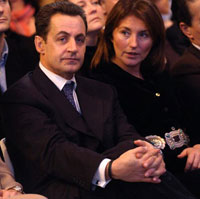 In a terse, 15-word statement, Sarkozy's office said Thursday the two were separating by mutual consent and would not comment further on the decision.

The couple's lawyer, Michele Cahen, told The Associated Press that the two were heard Monday by a judge who then granted their divorce. She would not say when the divorce proceedings had begun.

Although other French leaders have had extramarital affairs, Sarkozy is the first French president to divorce while in power.

He is also in the middle of his first major political challenge strikes Thursday that hobbled transport nationwide.

But he appears unfazed, and has given no hint that his marital troubles will dent his determination to push ahead with his ambitious program of economic, political and social reforms for France.

In the past week, as speculation about his marriage escalated, he continued to present an image of business as normal. He was in Portugal on Thursday for an EU summit.

Nicolas and Cecilia Sarkozy split for a few months in 2005, and she had seemed ill at ease as first lady since her husband's election in May. She did not cast a ballot in the runoff, and has rarely appeared with her husband in public in recent months.

Her one political venture came back to sting her: She raised her profile dramatically during a July mission to seek the release of five Bulgarian medics and a Palestinian doctor jailed in Libya. The stunned French media questioned her diplomatic credentials, and parliament is investigating arms deals signed soon after the release.

"She was shaken, murdered, wounded by the controversy," Isabelle Balkany, a friend of the couple, said on France Inter radio Thursday.

"Cecilia is a woman of conviction who needs to do things; feel useful. She knew that she would have trouble tolerating the conventional side" of being a president's wife, she said.

Balkany predicted that even if the president is "affected to his depths" by the "painful" decision to divorce, "I sincerely think that it will have absolutely no impact on his mission as chief of state."

Cecilia Sarkozy accompanied Sarkozy through the recent years of his political career, acting as an aide, confidante and an ever-present figure at political events.

Dynamic and ambitious, the two set out to buck conventions in French politics, she in designer denim and he jogging and speaking in straight, inelegant sound bites.

Their divorce, too, sets a precedent, and sets Nicolas Sarkozy apart from France's past leaders.

The first public sign of trouble was in 2005, when photos of Cecilia hand-in-hand with another man on a Manhattan sidewalk were splashed across a magazine cover.

Nicolas Sarkozy talked about it on national television, saying: "Like millions of families, mine has experienced some difficulties."

Observers wondered then whether Sarkozy could become president without his wife's support and presence beside him. The question turned out to be moot, as she came back in time for Sarkozy's presidential push.

Both Sarkozys had been previously married. They have two children each from their previous marriages, as well as their own son, Louis.

Until the Sarkozys, French presidents' private lives remained largely private affairs. But Sarkozy courted the spotlight for years in his long run-up to the presidency and that has meant his marital troubles were front-page news.

The opposition Socialists accused Sarkozy's office of choosing Thursday to announce the divorce to draw attention away from the nationwide strikes.

The daily Liberation devoted five pages and its front page to Sarkozy's marriage on Thursday, relegating the strikes to inside pages even though the newspaper traditionally leans left and might have been expected to devote more attention to the labor unrest.

Protesters at a union-led march in Paris on Thursday had little sympathy for Sarkozy's personal woes.

"There are problems more serious than that," said Yvelle Franck, a 63-year-old marching to protect retirement benefits.

Others were more gentle toward the president.