Police won't use key statements that "The Sopranos" actor Lillo Brancato Jr. made in his upcoming trial in the fatal shooting of an off-duty police officer. 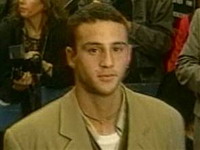 Prosecutors in New York agreed not to introduce the statements because Brancato, known for playing an aspiring mobster in the HBO show, was questioned without his lawyer, Assistant District Attorney Theresa Gottlieb said Tuesday.

The statements were made shortly after the December 2005 shooting of Officer Daniel Enchautegui. Brancato is alleged to have told investigators co-defendant Steven Armento shot the officer, though Brancato urged him not to.

"You think I'm in a lot of trouble?" the actor allegedly asked after telling officers he did not have a gun.

His lawyer, Joseph Tacopina, said Brancato was sedated and "could barely speak" when he was questioned.

Prosecutors say an off-duty Enchautegui confronted Brancato and Armento while they were breaking into an apartment in search of prescription drugs. Armento is accused of firing the fatal shot.

Brancato made his debut starring opposite Robert De Niro in "A Bronx Tale" in 1993.

His life began to disintegrate in 2005 with a pair of drug-related arrests and a disorderly conduct arrest two days before the shooting.