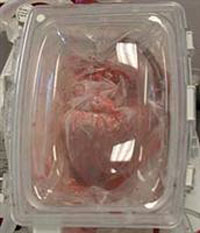 Nearly half of the Japanese who need heart transplantation die waiting, the survey showed. Only 10 percent received new hearts in Japan, a transplant expert said Wednesday.

Of the 378 applicants for transplants between April 1997 and July 2006, 158 people - or 41.7 percent - died while still on the waiting list, said Hisayoshi Fujiwara, chairman of the heart transplant committee of the Japan Circulation Society.

Only 38 applicants - about 10 percent - received new hearts in Japan, while another 67 had to go abroad for the procedure, said Fujiwara, whose organization is preparing a study on the progress since Japan overturned its longtime ban on heart transplants.

Fujiwara said 273 people have not received any transplants.

Heart transplants were banned in Japan until a 1997 law recognized brain death for the first time, but the study suggests that few strides have been made in the decade since to ensure that those in need can get organs.

A lack of donors and strict criteria in Japan make it hard for transplants to become more available, Fujiwara said.

Fujiwara also pointed to the fact that a donor in Japan has to register for a donor card expressing the will to donate organs and get family approval, a process that discourages prospective donors.

The total of 49 heart transplants have been performed in Japan as of mid-October, according to the society.

Some Japanese go to China, the destination of many foreigners desperately in need of transplants. A Japanese man operating a company in northern China has been arrested by Chinese police in connection with illegal organ transplants, according to a media report Tuesday.