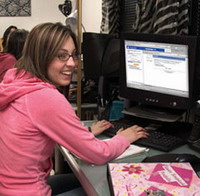 The agreement calls for Facebook to respond and begin addressing complaints of nudity, pornography or unwelcome contact within 24 hours of receiving them, and to report to the complainant within 72 hours on how it will respond.

It also calls for Facebook, which has about 47 million users, to allow someone independent - and approved by New York Attorney General Andrew Cuomo's office - to report for two years on its compliance with the new safeguards.

"These social networking sites are attractive. We want to make sure they're safe," Cuomo said. "Facebook will have the safest interactions of its kind on the Internet."

Cuomo said the settlement recognizes that parents share in the responsibility to shield their children from inappropriate Web content. His office began investigating the Web site after receiving complaints.

The disclosure section on Facebook's site will say, "Facebook cannot guarantee that its site is entirely free of illegal, offensive, pornographic or otherwise inappropriate material, or that its members will not encounter or inappropriate or illegal conduct from other members," Cuomo said.

"It puts the parent on notice, frankly, so the parent makes the decision and the parent exercises his or her best judgment," Cuomo said.

Facebook receives as many as tens of thousands of complaints in a day, said Chris Kelly, the chief privacy officer for Facebook. With the agreement, complaints about inappropriate content will be pushed to the top of the queue.

"We care deeply about our Facebook users and today we pledge a solution," Kelly said. "We believe that safety is an ongoing process."

Cuomo said he hoped that other social networking sites would follow Facebook's lead. He said his office was in discussions with other sites, but he declined to name them.

Cuomo said the agreement was distinct from an ongoing effort by the attorneys general of all 50 states to impose age-verification requirements and other safeguards on social networking sites.