The Chocolate Jesus is resurrected. 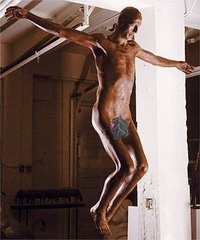 "My Sweet Lord," an anatomically correct milk chocolate sculpture of Jesus Christ that infuriated Catholics before its April unveiling was canceled, returns Oct. 27 to a New York City art gallery, its creator said Tuesday. This time, artist Cosimo Cavallaro said he expects the public exhibit to proceed without a problem.

"There is nothing offensive about this," Cavallaro said. "If my intentions were to offend, if I did do something wrong, I wouldn't be doing this. But I didn't do anything wrong."

Cavallaro, who received death threats before the April show was canceled, said the vast majority of his mail was in support of his 6-foot (2-meter) piece.

"I got a lot of positive mail from people in the Catholic Church, people studying theology, people in monasteries," Cavallaro said. "All kinds of letters and e-mails of support."

The last show was criticized for its timing and its location. The exhibit, in a gallery visible to passersby on a Manhattan street, was set to open one day after Palm Sunday and four days before Christians marked the crucifixion of Christ on Good Friday.

The Catholic League, which led the charge against "My Sweet Lord," said the change in venue and the exhibition's new opening date would keep it from calling for another shutdown.

"We don't approve of the piece at all, but it's not something we're going to protest," said Kiera McCaffrey, the league's director of communications. "This is much less an in-your-face assault on Christians, and it's not happening during Holy Week."

Cavallaro's work features Christ with outstretched arms, as though hanging from an invisible cross. Unlike traditional religious depictions of Christ, Cavallaro's Jesus lacks a loincloth.

The sculpture is actually a new version of "My Sweet Lord," created with 200 pounds (91 kilograms) of chocolate over three days. The original was stored in a Brooklyn facility where mice nibbled away at its hands, ears, nose and feet, forcing Cavallaro to toss the original and recast the sculpture.

The exhibit at the Proposition Gallery will be accompanied by a set of chocolate Catholic icons created by Cavallaro, a group that includes the Virgin Mary and saints Francis, Augustine, Michael, Jude, Anthony and Fermin.

"After the cancellation of the show, it got me to look into the Catholic religion a little deeper," Cavallero said. "I started thinking about the saints, how they were ostracized for their beliefs and then canonized."