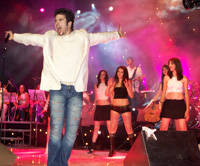 Proeski, 26, represented Macedonia in the 2004 Eurovision Song Contest, and his good looks and romantic songs such as "Heart is not a stone" and "Tie me to yourself" won him fans across the former Yugoslavia. He recorded seven albums, as well as duets with other popular singers in the Balkans.

The Macedonian government declared Wednesday a day of mourning for Proeski, spokesman Ivica Bocevski said. State radio said the country was in shock.

"This is the worst day of my life. We all lost Toshe," Proeski's composer and friend Grigor Koprov said.

Born in Krusevo, Macedonia, Proeski began his music career in 1996. He studied solo singing at Skopje Music Academy and in New York. He was also known for his work for good causes and became a UNICEF Goodwill Ambassador in 2004.