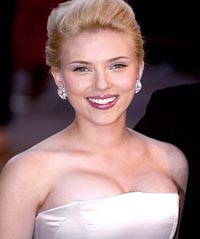 Women’s success made some Hollywood’s leading ladies gather at a magazine ceremony – they were marking the achievements of six actresses and a director.

"It's great that the focus is on women, who are functioning, who are all working, who are productive," Bacall told The Associated Press. "I've always been in favor of that, and I've always known that women are capable of going as high as they want to go."

"There's this idea (Hollywood) is this deep, dark place. In reality, I think that it's a reflection of society in general," said Johansson, 22, when asked how she has avoided running into trouble like Britney Spears, Paris Hilton and Lindsay Lohan.

Like Johansson, Diane Lane, 41, started her career early on, as a teen in 1979's "A Little Romance." Over the decades, she has seen improvements for Hollywood women of all ages, she said.

"There's a lot more opportunity for young women, and that's great, and I like to think that I was there to help pave a few stones," Lane said. "It's wonderful to have all the different stages of a woman's life acknowledged and appreciated."

Each honoree, perhaps not coincidentally, has at least one major movie coming soon. Amy Adams has two: the Disney romance "Enchanted" and the action-drama "Charlie Wilson's War" with Tom Hanks and Julia Roberts. She said both films are spoils of her 2005 Oscar nomination for "Junebug."

"The opportunities that it presented are really fantastic," she said of the Oscar experience.

The honorees are profiled in November's Elle magazine.