Man survives falling 98 feet down wearing only his underwear 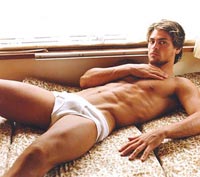 Man survives falling 98 feet down wearing only his underwear

An Australian man wearing only his underpants survived a 30-meter (98-foot) fall from his ninth-floor apartment after trying to walk to a neighbor's balcony while balancing on a plank, police said Tuesday.

A garden gazebo broke the 35-year-old man's fall, and he was taken to a hospital in a serious condition.

Ros Weatherall, a spokeswoman for Western Australia state police, said rescue workers found the man, who was not immediately identified, wearing only his underpants.

"He was skylarking around, building planks across to his neighbor's place, when it happened," she said. "He was very lucky."