Two activists in Belarus are believed to be finalists for the Nobel Peace Prize - recognition, that the world has not given up on reform in a nation often called Europe's last dictatorship. 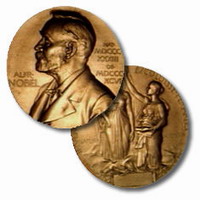 Under President Alexander Lukashenko's 13-year rule, the nation of 10 million remains frozen in the Soviet era, with a planned economy, a rubber-stamp legislature and virtually no independent media.

"The world is giving a signal that it is not isolating Belarus' civil society, but it is only Lukashenko who is being isolated," said Ales Byalyatsky, head of the Vyasna human rights center, who is believed to have been nominated for the peace award along with opposition leader Stanislav Shushkevich.

Lukashenko, a former collective farm director, has quashed dissent, silenced opponents and prolonged his rule through elections regarded in the West as illegitimate.

One day Byalyatsky hopes to change that.

"The very fact that I was nominated speaks about the attention paid to Europe's last dictatorship," the 45-year-old human rights advocate told The Associated Press in a telephone interview.

An ethnic Belarusian born in then-Soviet Russia, Byalyatsky moved to neighboring Belarus to study history and philology and soon became a leading scholar of Belarusian literature.

When Soviet leader Mikhail Gorbachev's perestroika campaign prompted a gradual liberalization of society, Byalyatsky could no longer just stick to his literature books.

He was one of the organizers of anti-communist demonstrations in the late 1980s. That earned him brief arrests, fines and harassment at work.

Those protests transformed him from an academic into a rights advocate.

"I was just mesmerized by the change in the air," he said. "I still believe in change."

Today, under Lukashenko's authoritarian government, the office of Vyasna is hidden in a cramped Minks apartment with windows permanently covered by blinds. His colleagues are routinely arrested. But Byalyatsky vows to continue his fight.

Shushkevich, who shares some of the credit for dismantling the Soviet Union, has many of the same hopes - and similar problems.

The 72-year-old physicist entered politics in the late 1980s, quickly becoming parliament speaker - the top post in Belarus - and served as the country's leader for three years after the Soviet collapse in 1991.

In 1994, Lukashenko accused him of corruption and forced him to resign.

While an average Belarusian retiree earns a pension of some $150 (105 EUR), Shushkevich receives $1.50 (1.05 EUR) a month - punishment from Lukashenko for his role in dismantling the Soviet Union. Shushkevich, who is forbidden to lecture in local universities, makes ends meet by delivering guest lectures in Poland.

"In Belarus he is practically banned, every day we fear arrest," said Shushkevich's mother-in-law, Galina Simonenko. Shushkevich could not be reached for comment Thursday.

In what critics called the government's latest move against opponents, the Supreme Court on Thursday ordered the liquidation of an opposition women's political party called Nadzeya, or Hope.

The court cited problems with registration and other documents, said party leader Yelena Yeskova. "We sharply criticize the politics of Alexander Lukashenko - that's the real reason," she said.