A Regent University law student will be castigated for posting an unflattering photo of school founder and Christian televangelist Pat Robertson on the Internet. 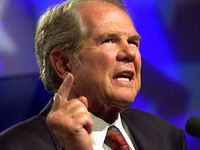 The picture, posted on Adam M. Key's Facebook social-networking page, shows Regent's founder and president making what appears to be an obscene gesture. The second-year law student copied it from a YouTube video in which Robertson scratches his face with his middle finger.

Key said officials at the private Christian university in Virginia Beach demanded that he either publicly apologize and withhold public comment about the matter, or submit to the law school dean a legal brief defending the posting.

He chose the latter, arguing that his posting was satire protected under the First Amendment to the U.S. Constitution, which protest free speech and freedom of the press. Court rulings traditionally have been especially protective of satirical speech and publications.

"I believe they're wrong from a legal standpoint," he said in a telephone interview Thursday. "But also, it's important in the Christian faith to be able to criticize our leaders."

According to Key, dean Jeffrey Brauch rejected his written legal brief and he now faces disciplinary action - perhaps even expulsion - under the university's Standards of Personal Conduct.

"I will pay any price to defend free expression - especially against anyone who wants to take it away in the name of God," Key said.

Robertson said in a written statement Thursday evening that privacy laws barred him from commenting specifically on Key's situation, which was first reported by The Virginian-Pilot newspaper. He said that "in general, no action should be taken against anyone who exercises their freedom of speech and expression, and that includes criticism or satire of the chancellor."

He continued: "However, we do not feel that freedom of speech encompasses the practice of the deliberate manipulation of television images to transform an innocent gesture into something obscene."

Key said Robertson's statement "sounds like a very political way of saying he supports speech, just not this speech."

Key, a bearded and heavily tattooed 23-year-old Lutheran who received his undergraduate degree from Stephen F. Austin State University in Texas, said he has considered transferring from Regent and was even accepted at the University of Houston last summer. He said he did not transfer because Houston is more expensive, and because a professor told Key that Regent needed someone like him to shake up the conservative campus and spur change.