Anita Hill works on her project over nation's workplaces

She was either a charlatan or a heroine, depending which side you took in the epic, gut-wrenching showdown that was the battle over Clarence Thomas' confirmation to the Supreme Court. 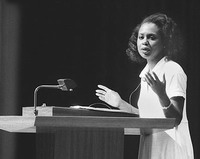 Anita Hill works on her project over nation's workplaces

Sixteen years later, Anita Hill can be found on a tranquil New England college campus, sifting through thousands of documents to try to answer this question: Have things gotten any better in our nation's workplaces?

Hill, whose sexual harassment allegations nearly scuttled Thomas' nomination, was already at work on her project, examining some 25,000 pieces of correspondence she has received since those circuslike hearings, when she recently found herself in the spotlight again.

Thomas had come out swinging in his new autobiography and accompanying media blitz, describing Hill as a mediocre worker, greedy, opportunistic, and of course, a liar.

Hill wrote an op-ed article standing by her claims. She did the same on the "Good Morning America" show. And now, she says, she wants to move beyond the old he-said, she-said questions to more substantive ones.

"What I want to know is whether we've made progress in the last 16 years," Hill said in a telephone interview from suburban Boston, where she is a visiting scholar at Wellesley College, on leave from her permanent appointment at Brandeis University. "I do hear from people who say things in the workplace have improved. And I think that's significant.

"But what's behind it, I don't know. Is it a fear of litigation, or is it because employers want to do the right thing? And if they're doing it right, does it really matter?"

Hill acknowledges her guarded optimism is based on anecdotal information. Ask lawyers in the field of sexual harassment whether things have actually gotten better, and you'll get a decidedly mixed answer.

"Yes and no," says Kathleen Peratis, a prominent employment and discrimination lawyer in New York. "Employers are much more sensitive about it, and much more worried about it. But it's from a liability point of view. They don't understand that the root problem is gender discrimination.

"They address the superficial conduct. More important would be to address the underlying imbalances in the power relationship."

Peratis notes it's extremely difficult to know how many cases get resolved satisfactorily, because the vast majority get settled out of court, with binding confidentiality orders. We only hear about the tiny percentage that actually make it to trial.

One high-profile case that did: that of Anucha Browne Sanders, the fired New York Knicks basketball executive who recently won an $11.6 million (8.17 million EUR) judgment against the team and coach Isaiah Thomas, whom she accused of calling her degrading names and making unwanted advances. She said she hoped her victory would be a "wake-up call" to employers across the nation.

But lawyers say the Sanders case was unique - the plaintiff was a well-paid executive who had the resources to pursue her claim to the end. "Most cases involve secretaries or other individuals without power in an organization," says Antonia Kousoulas, an employment lawyer in New York. "Seldom is it a high-ranking executive."

Peratis, who is representing a New York Rangers hockey cheerleader in another sex harassment case against Madison Square Garden, agrees. "Being able to carry it this far is not something most lawyers and most women can do," she says.

She adds that the broader problem is the common view that women can simply leave their jobs if they're unhappy. "That guy at the cocktail party, you can walk away from. But if it's at work, it's so much more complicated. It has a lot more meaning. What is it going to do to your future?

"I hear it every day, especially from defense lawyers," Peratis says. "'If it was so bad, why didn't she quit? Why did she take it?' The answers are always very complicated."

One specialist in anti-discrimination law complains of a "judge-invented doctrine" that holds that harassment is only illegal if it is severe or pervasive. "This has given license to judges to say to victims, 'yes, you've been harassed, but you haven't been harassed enough,"' says Craig Gurian, an adjunct professor of law at Fordham University.

"It's been a mixed bag," Gurian says of the gains made since the Thomas hearings. "There's greater awareness that sexual harassment is wrong. But there remain a series of problems." The more general obstacle, he says, is psychological: A large segment of society simply doesn't take the harm of discrimination seriously enough. "We haven't made as much headway there as we should have," Gurian says.

As for Hill, she says she is taken aback by the revived debate that has accompanied Thomas' book. "I'm surprised that 16 years later, we're doing this again," she says. "But I think we can look at this as an indication of how critical this issue is, how it affects people very deeply." And this time, she says, the argument isn't merely about what happened when Thomas was her boss at the Equal Employment Opportunity Commission in the early 1980s.

"This round of attention goes to the issue of sexual harassment generally, and how we are going to respond to it," she says. Another question, she adds, is whether Thomas can have an open mind on the bench when it comes to gender issues. "People are questioning his objectivity and his ability to really deal with the facts," Hill says, "given the number of facts he completely ignored or invented in his book."

Hill, who has been in academia since leaving the EEOC in 1983, says she conceived her current project when the 15th anniversary of the Thomas hearings approached. "It suggested to me that I needed to do something to honor those 15 years, something that reconnected me," she says.

She aims to have formed a collection of the letters before the 20th anniversary in 2011, but also wouldn't rule out writing a book before then, though no publishers have contacted her about it.

"This wasn't planned as a response to what he (Thomas) said," says Hill. "Even without his book, these letters are important." And she includes in that description the hate letters, too.