Doris Lessing pulled up in a black cab. Reporters opened the door and told her she had won the Nobel Prize for literature, to which she responded: "Oh Christ ... I couldn't care less." 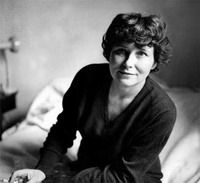 Lessing, who had no idea the prize was being announced Thursday, later said she thought the cameras were there to film a television program. Vegetables peeked out from blue plastic bags she carried out of the cab.

"This has been going on for 30 years," she said, as reporters helped her with the bags.

"I've won all the prizes in Europe, every bloody one, so I'm delighted to win them all, the whole lot, OK?" Lessing said, making her way through the crowd. "It's a royal flush."

"I'm sure you'd like some uplifting remarks," she added with a smile.

Lessing, who turns 88 later this month, is the oldest choice ever for a prize that usually goes to writers in their 50s and 60s. Although she is widely celebrated for "The Golden Notebook" and other works, she has received little attention in recent years and has been criticized as strident and eccentric.

Asked repeatedly if she was excited about the award, she held court from her doorstep and noted she had been in the running for the Nobel for decades.

"I can't say I'm overwhelmed with surprise," Lessing said. "I'm 88 years old and they can't give the Nobel to someone who's dead, so I think they were probably thinking they'd probably better give it to me now before I've popped off."

Surrounded by members of the international media in her small, flower-packed garden, Lessing was dismissive of the Nobel - calling the award process graceless and saying the prize "doesn't mean anything artistically."

She acknowledged the 10 million Swedish kronor (US$1.5 million; 1.1 million EUR) cash award was a lot of money, but even then, she seemed less than thrilled.

"I'm already thinking about all the people who are going to send me begging letters - I can see them lining up now," she said. The phone in her house, audible from the street, rang continuously.

But Lessing brightened when a reporter asked whether the Nobel win would generate any new interest in her work.

"I'm very pleased if I get some new readers," she said. "Yes, that's very nice, I hadn't thought of that."

She said she hoped the Nobel would draw readers to her latest writing project, "Alfred and Emily," which imagines her parents - whose lives were shattered by World War I - as they might have lived had the war never intervened.

The second part of what she said would be a "passionately anti-war" book would chronicle the full effect of the conflict on her parents' lives.

Lessing, who grew up on a farm in southern Rhodesia, which is now Zimbabwe, also had harsh words for the country's current leader, Robert Mugabe.

"I care about his country very much. Mugabe is a disaster," she said. "It's terrible people there are starving - literally."

Lessing was not the only uninterested winner of the world's top literature prize.

In 2003, South Africa's J.M. Coetzee wouldn't talk to reporters after his award was announced. He didn't show up to collect his two Booker prizes either.

In 1969, Samuel Beckett's wife, Suzanne, recoiled at hearing he had won the Nobel. "Quelle catastrophe!" she said. Jean-Paul Sartre is the only laureate to have declined the prize, in 1964.