Paul McCartney and Heather Mills appeared in court nearing a settlement in their divorce. 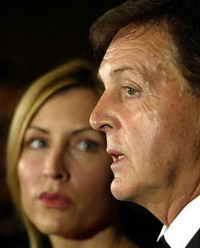 But after about seven hours at London's Royal Courts of Justice both left the building in separate cars without making any comment, and it was not immediately known if they had reached an agreement.

McCartney, wearing a dark gray suit, flashed his traditional "V" for victory sign as he left at about 6:45 p.m. in his black Lexus car, passing through crowds of journalists who had waited outside the neo-Gothic building all day. A few minutes later Mills, a former model, left in the back of a Ford Mondeo, her head covered.

The hearing was listed discreetly on the daily court lists only by its case number. Even a small security viewing hole in the door of the courtroom was covered to stop prying eyes.

McCartney and Mills announced in May of last year that they were splitting after four years of marriage.

McCartney and Mills have a 3-year-old daughter, Beatrice.

Mills, a 39-year-old activist, recently appeared as a contestant on the U.S. television program "Dancing With the Stars."

The McCartney divorce has become the most sensational marital breakup in Britain since Prince Charles and Princess Diana parted ways more than a decade ago.

The divorce is expected to be Britain's most expensive, with a settlement topping the 48-million pound (69 million EUR, US$98 million) award given to the ex-wife of an insurance tycoon last year.

Legal experts, however, expect that McCartney, whose wealth is estimated at 825 million pounds (1.2 billion EUR, US$1.7 billion), will insist on keeping the settlement confidential to prevent Mills from discussing it, The Mirror newspaper reported.

The British media reported that Thursday's hearing was the couple's last chance to privately resolve their divorce settlement before having to do that in public in a High Court case next year.