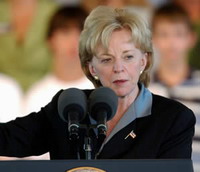 The report, which aired last weekend on the CBS News magazine "Sunday Morning," was timed to the publication of Cheney's book "Blue Skies, No Fences," which recalls her growing up in Wyoming. The story included a statement from Braver disclosing that her husband, Washington lawyer Robert B. Barnett, had represented Cheney in the deal for the book's publication.

Despite that disclosure, the "Sunday Morning" piece raised questions that Braver had a potential conflict of interest.

In a posting on Romenesko, a media-oriented blog on the Poynter Institute Web site, Lee Rood, investigations editor of The Des Moines Register, wrote: "Braver's husband helped publish this book. How nice that she has a network at her disposal to help him with the advertising."

Linda Mason, CBS News' senior vice president for standards, said Thursday she was "surprised" that such objections would be raised.

"If we had felt there was a conflict, of course we wouldn't have done it," Mason said. "We thought that because we had called attention to Bob's involvement, that we had done our part."

She noted that Braver is a Washington-based senior correspondent for the program.

Kathleen Hall Jamieson, director of the University of Pennsylvania's Annenberg Public Policy Center and an expert on media ethics, found no inherent impropriety in Braver reporting the story.

Conflicts
An hour after tactical nuclear strike, Russia will move to take Kyiv