Cartier clock to be sold at auction

Cartier onyx clock that belonged to former President Franklin Delano Roosevelt will be auctioned and it is expected to fetch up to $1 million (710,000 EUR). 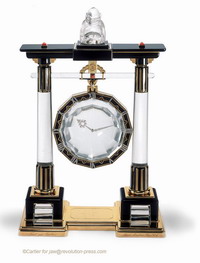 Cartier clock to be sold at auction

The clock, containing time zones for locations important to Allied forces in World War II, is being offered for sale on Dec. 4 at Sotheby's Manhattan auction house.

Cartier sent Roosevelt the gift with a letter in which the French jeweler expressed his gratitude for the president's "efforts and marvelous leadership that France will again live."

Roosevelt replied: "Soon, very soon, I hope that Paris will resume her place among the free capitals of the world. All of us are doing our best toward that end."

The letters are not part of the auction and are housed in the FDR Presidential Library in Hyde Park, N.Y.