What do you imagine when you hear the words Egypt and archaeology: mummies, pyramids, pharaoh-era fortresses. But tweezers? A razor? A tiny applicator for eye makeup? 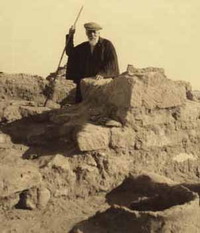 These everyday objects - ancient and yet so startlingly familiar - are part of an exhibit culled from the discoveries of Sir William Flinders Petrie, "the father of scientific archaeology."

The 220-plus items in the show, currently at the New Mexico Museum of Art, reflect the breadth of Petrie's work over five decades in Egypt and his lasting impact on his profession.

An Englishman who first headed to Egypt in 1880 - and promptly set up his hammock in an abandoned tomb - Petrie is credited with transforming the profession from mere treasure-hunting into a science.

Arriving at a time when collectors were rifling tombs and carting off the flashier items, Petrie gathered and analyzed artifacts overlooked by others and used them to help reconstruct the past, according to Peter Lacovara of the Michael C. Carlos Museum at Emory University in Atlanta.

"He was sort of like a crime scene investigator. He realized that every piece of evidence would help to tell the story," he said.

Lacovara organized the exhibit from the collection of the Petrie Museum of Egyptian Archaeology at University College, London.

It's the first time many of the items have been out of England since they were taken there from Egypt, he said, and it offers a "once-in-a-lifetime opportunity" to see the most important pieces in the Petrie Museum's collection.

The "Excavating Egypt" exhibit is on display in Santa Fe until Jan. 6, 2008. Then it heads to South Carolina, Florida, California and Kentucky, through mid-June of 2009.

Items in the exhibit - some of them dating back more than 5,000 years - include sculpture, ceramics, tools, weapons, writing utensils and texts, jewelry, glass, gaming pieces, dishes, bowls, jars and pots.

Among the most remarkable pieces is a garment that is one of the world's earliest surviving dresses. The fishnet-looking, fitted dress of beads and shells, more than 4,000 years old, was reconstructed from material found in tomb by a student of Petrie's.

"The dress looks like something Madonna would wear," said Lacovara, who is curator of ancient Egyptian, Nubian and Near Eastern art at the Atlanta museum.

Other notable items on display include a small, limestone model of a pyramid that Lacovara calls "the world's oldest architectural model."

There are small weights in the shapes of a calf and a hippopotamus head; a razor with a handle cast in the shape of a monkey; and tweezers in the form of a gazelle being chased by a hound.

"You get a real sense of the everyday, because these objects are so personal-sized," Ellen Zieselman, curator of education at the state-owned Museum of Art.

And if you doubt our connection to the ancients, look no further than the ceramic rat trap, an early version - from the Middle Kingdom, 2055 to 1650 B.C. - of a "live trap" for removing rodents.

Or the gold-colored foot case - which protected the feet of a mummy - on which is painted familiar-looking black sandal straps. "She's wearing flip-flops," Zieselman noted during a recent tour of the exhibit.

The pottery in the exhibit demonstrates one of Petrie's greatest contributions to the study of archaeology, the development of seriation or "sequence dating," according to Lacovara.

"Before Petrie's day, people scoffed at the idea that you could use pottery for dating. Thanks to Petrie, it's become the primary tool of archaeologists. He was the first to realize its importance," Lacovara said.

Petrie was more "a rumpled scholar" than a dashing adventurer, according to Lacovara, who wrote over 1,000 books and articles and trained or influenced Middle Eastern archaeologists for more than a century.

His benefactor was English novelist and journalist Amelia Edwards, who founded what is now known as the Egypt Exploration Society, for which Petrie worked, and who funded a professorship in Egyptian archaeology at University College.