Police detained an aspiring horror novelist after discovering his girlfriend's torso in his closet, a leg in the refrigerator and bones in a cereal box. 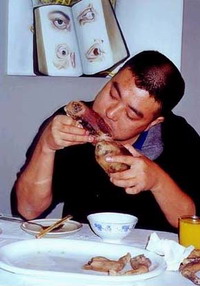 Jose Luis Calva told police he had boiled some of his girlfriend's flesh but that he hadn't eaten it, the spokesman said on condition of anonymity because he was not authorized to talk about the case.

Calva told police he was a writer and poet - officers found the draft of a novel titled "Cannibalistic Instincts," he said.

Investigators were trying to determine if chunks of fried meat found in a pan in the apartment were human, the spokesman said.

Police came to Calva's apartment Monday after neighbors reported a fetid smell. They discovered the dismembered body of his girlfriend Alejandra Galeana in a closet, the spokesman said. A leg and pieces of an arm were in a refrigerator and there were bones inside a cereal box.

The family of Galeana, a 30-year-old pharmacy clerk, reported her missing on Friday and told police of her relationship with Calva, the official said.

Calva is being investigated in the killings of two other women, including an ex-girlfriend, also a pharmacy worker, whose dismembered body was found in 2004, and an unidentified prostitute who was killed earlier this year.

Calva tried to run from police to avoid arrest, but was struck by a car and was still hospitalized on Thursday.