Images from Harry Potter books and movies used without permission cost the organizers of a Hindu festival in east India two million rupees. 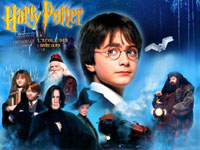 Penguin India took legal action on behalf of author J.K. Rowling and Warner Brothers, who hold the rights in India, over a temporary shrine erected in the West Bengal city of Calcutta to honor the Hindu goddess of valor, Durga. The shrine was decorated to resemble Hogwarts School where the fictional boy wizard is taught his skills, and featured stills from the Harry Potter movies.

"Sadly, the organizers of this large-scale commercially sponsored event did not approach us for permission to go ahead," Warner Brothers said in a statement in London.

"This event falls outside the guidelines set up by Warner Bros., J.K. Rowling and her publishers to help charitable and not-for-profit organizations to run small-scale themed events that protect fans and allow everyone to enjoy Harry Potter books, films and events in the spirit in which they were created," the statement said.

Each year at the festival, different neighborhoods compete for visitors at their temporary Durga shrines - known as pandals - using images from films or of top-ranking cricket stars to attract attention. Each night, families travel around the city visiting the pandals and eating at the food stalls around the shrine.

Religion often takes a back seat at the nonetheless important Hindu festival, which is also celebrated with new clothes and gifts. In West Bengal, the festival has something of a carnival atmosphere, and people of all religions join the celebrations.

The festival organizers expressed dismay at the ruling. They planned to ask the court Friday to reconsider its ruling and allow the shrine to stand for the five-day festival beginning Oct. 17 without payment of the fine.

"The summons has come at a time when the pandal is almost ready. We don't know what to do now as we cannot afford to pay the fine," the chief organizer Harinmoy Roychowdhury said.

"We created the structure to entertain people," the committee joint secretary Subhabrata Bhattacharjee said. "Many puja organizers replicate many other things, but nothing of this sort has ever happened before."