U.S. woman convicted of using her son as weapon 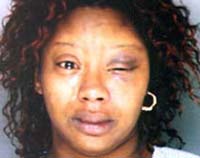 U.S. woman convicted of using her son as weapon

A U.S. woman was convicted of swinging her 4-year-old son to hit her boyfriend.

Prosecutors said Graham and DeAngelo Troop got into a fight early on Oct. 8, 2006, after Graham came home from a night of drinking.

Graham grabbed her son Jarron by his feet and swung him, hitting Troop and fracturing the infant's skull. The child has recovered and is living with Graham's family.

Graham testified she did not remember how Jarron's skull was broken. But prosecutors say she confessed.

It was not immediately clear what sentence she could receive.