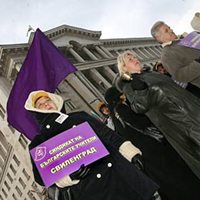 Sofia’s downtown was crowded Thursday with teachers, who stage a nationwide strike for higher wages and increased state funding of education.

Teachers have been striking since Sept. 24 for a 100-percent pay rise.

Yanka Takeva, head of the National Teachers' Union, said some 75,000 teachers from across the country joined Thursday's rally in the Bulgarian capital.

Chanting "We want decent salaries," teachers halted downtown traffic as they marched through the main streets of Sofia.

Later Thursday, they planned to gather in front of the government headquarters, where teaching unions were holding a new round of pay negotiations.

Teachers are demanding a 100-percent pay rise starting next year, and an allocation of at least 5 percent of the country's gross domestic product for education.

There are about 100,000 teachers in Bulgaria's state schools and nurseries, and their average monthly wage is 440 leva (EUR225, US$317), according to government figures.

The government has offered a 15-percent wage increase starting in January, and a second 15-percent increase in July. It plans to spend about 4.3 percent of GDP on education in 2008, up from 4.18 percent this year.