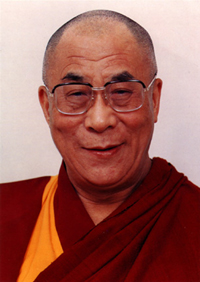 The U.S. Congress has a plan to award its highest civilian honor to the Dalai Lama, recognized by Beijing as a separatist. China became furious.

Liu said China had "presented a representation" to Washington over Congress' move, but gave no details. Congress was to award the prize this month.

The U.S. House of Representatives voted on Sept. 13 to bestow the award on the Dalai Lama, winner of the 1989 Nobel Peace Prize, citing his "many enduring and outstanding contributions to peace, nonviolence, human rights, and religious understanding."

The Tibetan leader has been based in India since fleeing his Himalayan homeland in 1959 amid a failed uprising against Chinese rule.

He remains immensely popular among Tibetans, despite persistent efforts to demonize him by Beijing, which objects vigorously to all overseas visits by the Dalai Lama.

Despite that, foreign leaders have grown increasingly willing to risk Beijing's wrath to underscore concerns for human rights in Tibet, which China has ruled with a heavy hand since communist forces invaded in 1951.

China claims Tibet has been its territory for centuries, but many Tibetans say they were effectively independent for most of that period.

In its announcement, Congress said the Dalai Lama was "recognized in the United States and throughout the world as a leading figure of moral and religious authority."

It praised him for fighting for democracy, freedom, and Tibet's cultural heritage, saying he promoted peace for Tibet "through a negotiated settlement of the Tibet issue, based on autonomy within the People's Republic of China."

The Dalai Lama insists he wants "real autonomy," not independence for Tibet, but Beijing continues to accuse him of seeking to split the region from China.