The divorce case of Paul McCartney and Heather Mills is scheduled to return to the Family Court in London on Thursday, but there is no indication whether either will attend or where the hearing will be held. 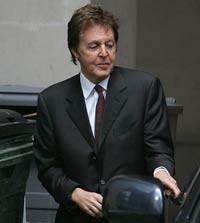 The hearing is listed discreetly on the daily court lists only by its case number, one of two cases not listed as assigned to a particular judge or courtroom.

McCartney and Mills, who have a 3-year-old daughter, announced in May of last year that they were splitting after four years of marriage.