Former "Lost" star Michelle Rodriguez has been sentenced to six months in jail for failing to complete community service and alcohol monitoring as part of her probation from a previous drunk driving incident. 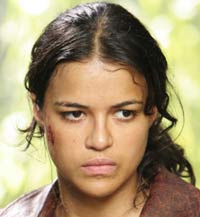 Rodriguez on Wednesday appeared before Superior Court Judge Daviann L. Mitchell, who ordered her to report to the county jail on Christmas Eve, the city attorney's office said.

"She did file a document that said she completed community service on September 25th, but we obtained evidence that she was in New York that day," Mateljan said.

The document was required as part of 30 days of community service Rodriguez was ordered to serve for violating probation in a 2003 drunken driving case.

Mitchell ordered Rodriguez to complete the community service cleaning streets and highways, and prohibited her from being granted early release for work furlough or electronic monitoring, Mateljan said.

Calls to Rodriguez's attorney Wednesday were not immediately returned.

Rodriguez was on three years probation after pleading no contest to hit-and-run, driving on a suspended license and drunken driving in connection with two incidents in Hollywood in 2003.

She violated her probation when she was arrested in Hawaii on a drunken driving charge in 2005.

Rodriguez was ordered to spend 60 days in jail, but served less than a day because of jail overcrowding in May 2006. She was then ordered to perform community service and remain on probation until June 2009.

Rodriguez appeared in one season of ABC's "Lost." Her film credits include "The Fast and The Furious," "Blue Crush" and "Girlfight."