The subtle becomes the sublime in Donna Uchizono's choreography and her latest work. 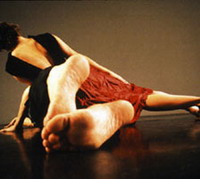 What begins with three dancers sitting atop ladders bobbing their heads or turning them in figure eights, slowly unfolds into a work that warps our perception of space, the air around us and feels like meditation.

Uchizono debuted the dance this week at Dance Theater Workshop.

Dancers Hristoula Harakas, Antonio Ramos and Julie Alexander lead us through the piece with exceptional energy and precision given that much of the movement is done on top of repetitive body vibrations. Legs extend beautifully, arms slice the air and dancers move on releve, even as the legs, hips and head shake.

They descend from ladders after the long bout of head bobbing, onto a clear, sort of white plastic tarp that covers the entire stage. Harakas and Ramos stand opposite Alexander and the void between them seems immense. The lighting designed by Jane Shaw adds to the bleakness of the scene, bringing out a cold quality in the tarp, and highlighting the dark emptiness that surrounds the dancers.

The movement on the plastic may seem odd, but it adds sound and texture to the piece and a physicality to the idea of the connection between humans and events. As Alexander and Harakas twist awkwardly toward each other with reaching arms, Ramos obsessively attempts to straighten out every wrinkle imposed on the plastic by their simple shifts.

Quirky encounters such as this fill the work, but the more human elements of the dance distract in some ways. When Harakas kisses Ramos, it seems out of place, or when Ramos laughs, smiles and acts exuberant while painting a piece of plastic hanging from the ceiling, it's unclear how that relates to the more eerie and serene mood imbued in the rest of the performance.

Some interactions, however, are divine, such as a side by side duet between Harakas and Alexander in which they dance an entire section with their heads down calling attention to the tiny, luscious movements made by their feet. The speed is almost cartoonlike and it looks as if they are floating on air as they point a foot, brush it subtly against the floor, jump into ballet positions and flex their feet out and in. The effect is similar to old silent films where time is somehow sped up.

The tiny leg series performed by the two women is then imposed on Ramos and he makes it big. While at first this seems out of place, in fact it makes obvious the idea that the space has been transformed, that our perception of reality has changed. As he extends his leg behind him, leaps and twists, what would normally be light and airy movement seems weighted, as though he is pushing through a thick substance.

The small things add up in "Thin Air." The music, composed by Fred Frith, takes us from acoustic guitar, to electric and to repetitive impending scores varied with intermittent gong sounds marking time.

Uchizono said she drew source material for her dance from "Buddhist studies of emptiness as well as concepts of quantum physics." This Bessie Award Winner accomplished what she set out to do and set to movement how our sense of reality is shaped by perception. The build up of subtle repetitive moves, vibrations and sound changed our perception of the space around us.

Though not the strongest work by Uchizono, "Thin Air" is one of her more experiential dances.

Putin keeps his promise and presents impressive gift to China