Drew Carey's vocation is to be game-show host

Drew Carey was born to be a game-show host, only he didn't know it. 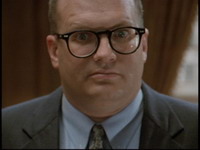 Drew Carey's vocation is to be game-show host

It wasn't until the 49-year-old comedian became the new face of "The Price Is Right" that he realized game shows were his true calling. Carey makes his "Price" debut on Monday.

"Unbeknownst to me, I was preparing myself to be a super game-show host of the 21st century," Carey says with a smile between tapings at CBS' Bob Barker Studio. "I wouldn't be good at this if it wasn't for all that other stuff I did."

He started with standup and starred in "The Drew Carey Show" and "Whose Line is it Anyway?" before saying goodbye to television in 2004. Carey was enjoying a semiretired life of leisure when he was tapped to host a new CBS game show, "Power of 10."

Carey says he got "kind of trashed" when his sitcom ended so he was reticent to return to TV.

"It kind of left me with a bad taste in my mouth," he says. He accepted the "Power of 10" gig "only because it was a smart show and I thought nobody could make fun of me if I did that."

Then he was invited to take Barker's place on "The Price Is Right." Carey immediately declined. Worst-case scenarios filled his mind.

"If you think I'm going to sit at `The Price Is Right' so everybody can take potshots at me, forget it," he remembers thinking.

CBS called again a few weeks later and convinced Carey he was just who they were looking for. His friends and advisers told him to go for it. Suddenly the semiretired comedian who spent his time reading and taking photography classes was coming back to television in a big way - with daytime and prime-time game shows.

Carey studied games from "The Price Is Right" such as "Pick-a-Pair" and "Line 'em Up" as he shuttled between "Power of 10" tapings in New York and "Price" tapings in Los Angeles. "Power of 10," in which contestants try to predict how most Americans respond to moral, social and political poll questions, is "stimulating," Carey says. But it was "Price" that showed him he was a born game-show host.

"It's like meeting the right girl," he says. "This is a really good fit. I'm really comfortable here and it seems like I should have been doing this a long time ago."