A pizza shop manager who kidnapped and held captive two young boys pleaded guilty Wednesday to making explicit photos and videotapes with one of them and taking him across state lines. 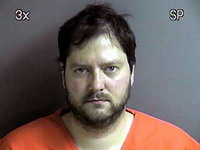 Michael Devlin entered pleas to six counts in the last of a series of court proceedings this week in which he pleaded guilty to dozens of child kidnapping and sodomy charges for the abduction and abuse of Ben Ownby and Shawn Hornbeck.

She said Devlin can receive up to 30 years under federal guidelines, but he would serve the federal time only after he had completed the multiple life terms he was sentenced to in three counties on Monday and Tuesday.

Afterward, Shawn's father, Craig Akers, described the end of four hearings as a big relief, a "last sigh" for the family. "We're so glad this is the outcome, that the monster is caged and will remain caged." But, he said, Devlin's guilty pleas did not take away from the heartbreak and pain the family endured over the years.

His mother, Pam Akers, said she had tried repeatedly to look Devlin in the eye, but he would not match her gaze.

"We're standing. We're still standing strong, and he's the one that's going down," she said. The boys have not been present at this week's proceedings.

"This guy really illustrated every parents' worst fear - that their child could be minding their own business and literally disappear and be used in this kind of horrific way," Loudon said.

Loudon's proposal would create the crime of "aggravated child kidnapping," which occurs when a child younger than 18 is kidnapped or confined and then raped or sodomized.

Under current Missouri law, only first-degree murder is eligible for the death sentence.

Devlin's sentencing was set for Dec. 21.

The hearings were part of an elaborate deal his attorneys struck in four jurisdictions in which Devlin was charged with more than 80 counts, including sexual assault, kidnapping and attempted murder. Devlin's life sentences assure he will spend the rest of his life in prison.

Devlin said through his attorneys that he accepted his punishment because he knew what he did was wrong - a statement quickly dismissed by prosecutors and the boys' families.

"He pleaded guilty because he does not want the world to know the full extent of what he did," said St. Louis County prosecutor Robert McCulloch.

Prosecutors laid out new evidence showing that Devlin tortured Shawn during his first days in captivity and made the boy promise not to flee in order to stay alive. It was a "devil's bargain" that kept Shawn under Devlin's sway for more than four years, even when the boy had phone and Internet access, said Shawn's stepfather, Craig Akers.

"We know now the details that made him not run away," Akers said after the hearings.

Devlin has admitted in graphic detail how he abducted Shawn in 2002 and described the point at which Shawn apparently turned from a kidnap victim into a powerless captive.

Prosecutors also said that Devlin began abusing Ben Ownby immediately after abducting him Jan. 8. Devlin abused the boy each day until authorities found Ben and Shawn in Devlin's apartment and rescued them Jan. 12, as Devlin worked the day shift at his shop.

While it is The Associated Press' policy not to identify suspected victims of sexual abuse in most cases, the story of Shawn and Ben has been widely publicized and their names are well known.