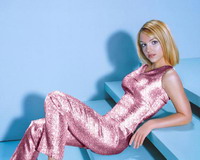 The pop star's eagerly anticipated new album will be released Oct. 30, Jive Records announced Wednesday, citing Internet leaks as the reason the date was moved up from Nov. 13.

Jive said it "is doing everything possible to prevent and avoid any further illegal distribution of songs," including the leaking of "unfinished material and demos represented as completed legitimate songs" to the Internet.

Spears' new song, "Gimme More," is the first single from "Blackout." It is rising on the music charts - jumping from No. 68 to No. 3 on Billboard's Hot 100 last week - despite the pop star's personal woes.

Spears, 25, was ordered last week to temporarily surrender custody of her sons, Sean Preston, 2, and Jayden James, 1, to ex-husband Kevin Federline. Another custody hearing is set for Oct. 26.

A day earlier, on Oct. 25, Spears is required to appear in a Los Angeles court to face charges of hit-and-run and driving without a valid license.

The charges stem from an Aug. 6 wreck during which paparazzi filmed Spears steering her car into another vehicle as she tried to turn into a spot in a Studio City parking lot. The video showed her walking away after assessing the damage to her own car. The owner of the other car filed a police report three days later.