Train traffic at a giant Metro station in central Paris was resumed after a bomb threat proved to be a false alert. 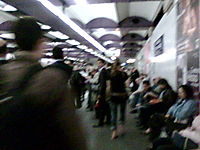 Police had ordered trains passing through the Metro station at Chatelet-Les Halles not to stop while checking out the threat - made in a telephone call from a phone booth. The anonymous caller claimed a bomb would explode at the station about 20 minutes after his 7 p.m. call, police said. The call was made to the police emergency line.

Police swarmed through the huge station looking for a bomb but found nothing, police said. A network of five Metro lines and several suburban trains passes through Chatelet-Les Halles station, in the heart of Paris.

Train traffic was restored about an hour later, police said.

There is heightened concern over potential terror attacks in France since a September threat from al-Qaida against French and Spanish living in North Africa, just across the Mediterranean, and an attack in Algeria in September on a convoy that injured two French citizens working there.

Deadly 1995 bombings in the Metro system that killed eight people were claimed by Algerian Islamic extremists. The trial of one suspect in the bombings, Rachid Ramda, is in progress in Paris.