Florida's police officer alleges the boy's family caused her fall during the rescuing of the young boy, saying she slipped and injured her knee while saving the child. 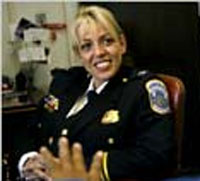 The young boy, Joey Cosmillo, fell into the family pool in January. He was resuscitated, but suffered brain damage and now cannot walk, talk or swallow. He lives in a nursing home and eats and breathes through tubes.

Casselberry police Sgt. Andrea Eichhorn alleges the boy's family  left a puddle of water on the floor, causing her fall during the rescue efforts. She broke her knee and missed two months of work.

"The loss we've suffered, and she's seeking money?" said Richard Cosmillo, 69, the boy's grandfather, who lived in the home with his wife and the boy's mother. "Of course there's going to be water in the house. He was sopping wet when we brought him in."

Eichhorn's personnel file includes numerous commendations. The 12-year veteran has worked as a hostage negotiator and prostitution decoy, and even wrestled razors away from a suicidal person, the Orlando Sentinel reported Wednesday.

Eichhorn's attorney, David Heil, said she now has persistent knee pain and will likely develop arthritis. He said city benefits paid by workers' compensation and some disability checks helped with medical bills, but it was not enough. The lawsuit seeks unspecified damages.

"It's a situation where the Cosmillos have caused these problems, brought them on themselves, then tried to play the victim," Heil said.

Police Chief John Pavlis said Eichhorn was a good officer, though he urged her not to sue.