A judge on Tuesday ordered Britney Spears to be booked at a Los Angeles police station in her hit-and-run case stemming from a summer accident. 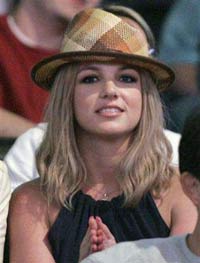 Commissioner Rebecca Omens said the 25-year-old pop star must be fingerprinted and photographed before Oct. 25, when she is required to appear in court. Spears was charged last month with hit and run and driving without a valid license after she allegedly smashed her car into another in a parking lot in August.

Spears was not present for Tuesday's arraignment. She was represented by attorney Michael Flanagan, who said his client "must go to any L.A. police station for fingerprints and mug shots."

"She will do that, but I don't know when," Flanagan told the celebrity Web site CelebTV.com.

The charges stem from an Aug. 6 parking-lot crash during which paparazzi filmed Spears steering her car into another vehicle as she tried to turn into a spot in a Studio City parking lot. After assessing the damage to her own car, a paparazzi video shows her walking away.

The owner of the other car, Kim Robard-Rifkin, filed a police report three days after the incident. She learned it was Spears who had hit her car through a video posted online.

Flanagan said Spears will pay for the damage to Robard-Rifkin's gray Mercedes-Benz.

"Britney wants to make sure (Robard-Rifkin) is compensated for any damages she may have and would like to figure out what those damages are," he said.