A black professor discovered a hangman's noose on her office door at Teachers College at Columbia University, and police said they were investigating the case as a possible hate crime. 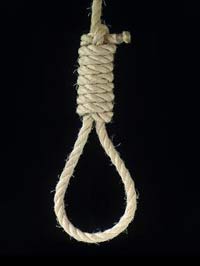 Teachers College President Susan H. Fuhrman sent an e-mail Tuesday to the college's 5,000 students and 150 faculty members explaining why police were on campus.

The school has not identified the 44-year-old professor but students said she teaches a class on racial justice.

"It's really really disturbing," student Mary Owens said. "These racist practices have been in place for so long, and they really have to be rooted out by everyone."

Nooses, reviled by many as symbols of lynchings in the Old South, have been in the news recently because of a case in Jena, Louisiana.

Recently, thousands of people protested the arrests of six black students in the incident.